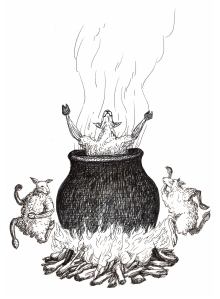 Some people are better at some things than others. Yes, I know – blindingly obvious, huh? But it’s amazing how much stall you can put in a single person’s advice, no hint of a second opinion or of checking over for anything missed.

I have the very good fortune to belong to AB-FAG, my local manuscript-critique-exchange group. Last week was one of our periodic get-togethers where, over a pint or two (white wine for the ladies*), we eviscerate our sacrificial lambuscript and perform several pagan – and probably illegal – orgiastic dances with its entrails. The cleaning bill’s a bit of a bugger, but it is a guaranteed cure of all known arrogances, blockages, superverbosities and misplaced metaphors in the writing world.

The point (and there is one) is this. Some people can spot things like plot-holes or impossible travel times. Some people are quite happy to let those go but are absolutely abhorring of the misplaced apostrophe. Some are super-hot at dialogue; when it’s singing and when it’s turning into gruesome parody.

My thing is the factual error; internal contradictions; things that a character describes but can’t actually see; and a side-order of plot-nonconvincery and missing motivations. A colleague is hot on character and voice. These strengths overlap (we hope) with those of the rest of the group. We can all see these things but some emphasise some things over others. Sometimes this leads to intense debate. Example: in this last manuscript there is a character of a piratical nature. Two of the group found him shallow and lacking in logic/motivation. Two others had absolutely no problem and thought him convincingly villainous.

It is an aside that the two who thought him shallow were male and the two who liked him female. Not sure if that really means anything. Just, as I said, an aside.

It’s up to the writer whether they make any changes – on this and on anything else – or if they simply say ‘to hell with you all’. The point is that one person can mislead, can give you a bum steer. There’s no guarantee that a multitude will be any righter, but a more rounded critique – by a body of people who read both in- and outside of the (any) genre – can be nothing but useful.

Because everyone reads differently. Even professionals – agents and editors and the like – have their strengths and weaknesses. They should be all-round better than you and I because it’s their job to see things from many angles: they should have the experience to have raised their floor to a level above that of the average joe. But – and I’m sure you all know this – they’re only human. Your manuscript can fall on the wrong desk at the wrong time. Some people might have a sudden urge for a red-hot erotic fantasy just as your worldly-worthy study in Victorian prudery arrives in their inbox. Just your bad luck.

There’s nothing you can do about luck. The only thing that’ll help you is to make sure that you’ve got the best possible material out there just in case your epic tome on German cheesemaking lands on the desk of a committed subscriber of Westphalia Tilsiter at the time when she’s desperate to bring her passion to the masses. And the best way to get the best possible material is to share your drafts with as wide an audience as possible – preferably early enough in your writing process that you’ve time and energy to make the changes.

And now I’m off to prepare my own sacrificial lambuscript for the altar of public opinion. Happy writing to all.

*An Al Murray/Pub Landlord quote. Not being sexist. Honest.