I’ve been musing, recently, on something you’d probably think I’d have worked out years ago, and that’s what I write about.

I’m not talking about that complex and ill-defined area of ‘theme’ that writing manuals always go on about – or, at least, not in the way that I interpret it.

Theme is, I think, what your story is about; what’s the thread that runs through it? They often say that you don’t know until the first draft is finished. Well, Night Shift is a murder mystery set in Antarctica (and is available from at least some good bookshops) and if there’s a theme…

Well, maybe I am talking about theme after all. It’s terribly complicated and, clearly, I don’t understand it at all. But I’m here to talk about two things that I’m slowly realising are significant influences on the novel and the trilogy as a whole. One is poverty. The other is mental illness.

Let’s talk about mental illness first because it’s simpler: I didn’t realise it when I was writing the early drafts at least, but Anders Nordvelt, my protagonist, is mentally ill. Childhood trauma leading to long-lasting depression and possible borderline personality disorder or Asperger’s. To what extent he’s a proxy to me you can decide yourself.

As I said, I had no plan to do this. It’s just how he came to be written. What pleases me immensely is that the trilogy in which he stars shows a clear progression in his mental health until, by the end of the third book, we (will) see…

Hold on their, youngster – let’s keep this spoiler-free, shall we?

As I said, that’s simple. It’s a character arc, albeit an inadvertent one. The issue of poverty is harder to explore.

One of the things that interviewers are fond of asking is if I’ve been to Antarctica. My stock answer has been to say that no, I haven’t, but whilst I was writing the first draft I was working in a building that lacked heating. Ah ha ha ha, how funny and disingenuous, let’s move on quickly, right?

Antarctica is a character in my novel and I’ve come to believe (not ‘realise’ because even now I’m not 100% on it) that it is based on my experiences of being poor.

Now I should say that I was never truly hungry. I always had a roof over my head. I had family to fall back on, loathe though I was to do that.

But I felt the constant pressure that poverty causes. It’s not necessarily about feeling a physical chill – not in my experience, at least – but it’s about constant stress, of worrying whether or not you can afford any luxuries at all. It’s having to carry a balance-sheet in your head at all times. It’s about being drained. Poverty is a vampire that sucks you dry and leaves a bloodless corpse in its wake.

And somehow these emotions became embodied within the frozen wastes. I don’t know how it happened and I don’t think it’s obvious in the novel. But that’s what it is to me as I now look back.

Antarctica, in the story, is context. It’s the matrix in which my characters operate; and even when it’s not mentioned it’s implicit within everything every character does. This, is realise now, is exactly how life was for me when I was flat broke.

Again I must say that there are a lot of people who have it a lot worse than me. This probably says as much about me as it does my economic state.

In Night Shift, when the chill of Antarctica starts to break through the walls and reach its frozen fingers into what was previously held safe, that how I felt when some unexpected expense undid all my hard-worn calculations. The retreat deeper into the bowels of the base was mirrored by my own retreat into home-life and hibernation.

Maybe I’m looking at this the wrong way. Maybe I should forget about ‘theme’; maybe instead it’s a perverted version of ‘write what you know’ (and see also here). My subconscious took an innocent story and twisted it into a nightmare of its own neuroses. And by telling you this I wonder if a) I’m putting off potential readers, or b) making everything worse.

But then, isn’t the subconscious responsible for all writing? Doesn’t it drive all our decisions, for better and for worse, and don’t we just try and justify the outcomes? I don’t know. This is all a bit too heavy for me.

So I shall sign off here, leaving only a vague sense of anxiety in my wake. Am I oversharing? Have I alienated you all forever?

I worry about these things. But I also hope. And wish you, as always, happy writing. 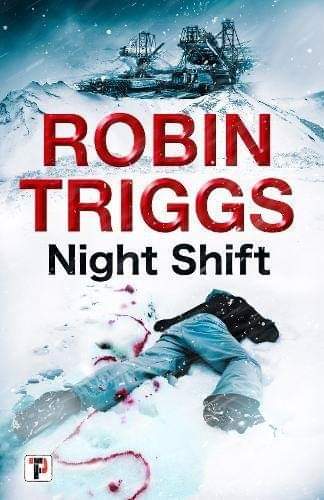 Today’s blog is brought to you in association with a vague sense of panic.

It is a month until the Great Day of Publishing. I have so much to do. And I have nothing at all to do.

Like many people I can make myself work hard and be personable. I can cold-call companies, and bookshops, and ask favours and make demands on strangers’ time. But it’s hard work. I’ve just got off the phone to a bookshop: it took me a whole weekend to work up the courage; I had to rehearse what I wanted to say; I had to be the very best ‘me’ I could possibly be.

It takes time and energy and, until the last decision is made and the final arrangement tidied, there’s always a sense of incompleteness.

Of course, nothing is ever truly finished. Arranged an event with a bookshop? How am I going to get there? Do I need to book accommodation? What do I need to take? Oh God I’m probably going to have to do a reading!

What if no-one turns up?

I want to tick off the tasks. I want arrangements to be signed, sealed and delivered. But I’ve never done this before – do I do it myself or do my people (ha!) have people to do this sort of thing? I don’t want to duplicate work. I don’t want to step on anyone’s toes. How many enquiries (per hour) can I send out before my emails get switched straight into the ‘annoying author’ siding?

What I should be doing:

If all else fails go write. It’s a healthy mantra.

Unfortunately, it’s hard to focus on the things that matter when there’s so much still unresolved.

Still, best be grateful; I can only imagine how the publisher’s feeling right now.

Apart from anything else they’ve got all my emails to read.